If I gave you these four online dating usernames (all made up, of course), whose profile do you think you’d click on first?  I’d venture to say, solely based on the username, that you’d choose the third or fourth one.  Am I right?  While the username is sometimes an afterthought for online daters, I encourage you to think of it more as an executive summary.  It is one additional chance to share an extra tidbit about yourself in online dating land.  Using a computer-generated number or your first name is analogous to wearing a black suit and white shirt amidst a line of others in a black suit and white shirt.  Having a fun, clever username adds some flair, like apurple checkered tie or pink nails with fancy designs on them.  (Yes – those are my nails below.  Like?) 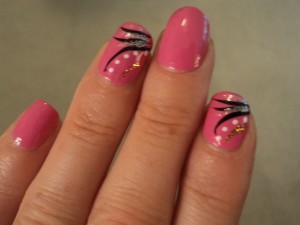 Let’s say you walked into a bookstore, and there was a book called, “The Scientific Answer to Your Most Common Questions.”  Would you buy it?  Now, what if the title was instead “Why Do Men Have Nipples?: Hundreds of Questions You’d Only Ask a Doctor After Your Third Martini” that graced the shelf?  Perhaps some of us, out of sheer embarrassment, would opt for the first choice, but I’m guessing that more of us would at least be intrigued by the scandalous title of the second choice… and then maybe go home and buy it online so no one can tell just how intrigued we are.  (And for the record, this is a real book.  I own it.  Don’t judge.)

Now, back to usernames…

When online dating, one objective is to catch someone’s attention quickly.  There are so many options out there that it’s important to take every opportunity to differentiate yourself.  As an exercise, think of two or three words that really define you – nouns, verbs, adjectives, anything.  Then, try to string them together into a username.  I’d much rather date a “NatsFanFromAK” over a “283017390” any day.  This username intrigues me.  When did the person move from Alaska?  And why would he then become a Nationals fan?  (Don’t get me wrong – I love my home team.)  I’ve learned a lot about this person in a mere 13 characters.  If anything, your potential matches know that you put in the extra time and effort to come up with something creative, even if it only took a minute.  Let’s also try to avoid anything negative, like “JustGotDumped” or “LonelyManHere.”

Before you take the leap and post your username, though, make sure it doesn’t have any undesired meanings.  For example, if you’re from Virginia but cheer for New York football teams, you might still want to stay away from something like “VAGiantsFan.”  Along those lines, if you’re from Alabama, definitely avoid things like “AnALfan.”  Or how about “Buttongirl,” who loves her collection of vintage buttons and brooches?  It’s probably best to leave anything that might be misconstrued as a body part out of your name.  And lastly – the pièce de résistance – it might be a good idea to check your username in Urban Dictionary before you post it.  There was a “Tossed Salad” incident on JDate that I don’t want to happen to you, too.

One thought on “What’s in a name?”