About three months ago, I went to adopt a dog. This was a big step for me since, as a young girl, I was bitten by my neighbor’s dog (and still have the scar to prove it). So, after months of petting dogs to get comfortable and reading “Dogs for Dummies” so I would have somewhat of a clue after the pup joined the Ettin clan, I was ready to bite the bullet and adopt a pooch. I searched the list and fell in love with little Bashful’s pictures. She was just so darn cute! I read her bio, and she seemed to have everything I was looking for – the right size, a good age, and that nice, brown, low-shedding fur that I like.

On that Sunday morning, I went to the adoption event, pages of notes in hand so I would know what to buy at the pet store once little Bashful was mine. (I’m an obsessive note-taker.) When I got there, she was just as cute as her photos… maybe even more so. And she was sweet, walking right up to me and sitting in my lap. What more could I want?

So, I was told to buy a collar while they got the paperwork ready. I opted to sit with her for another few minutes, saying things like, “I’m gonna be your puppy mommy.” (I’m also a total sap.) As the forms were coming my way, and I was really starting to bond with my new friend, a supervisor came over to me and said (while Bashful was still in my lap, mind you), “So, we decided that we’re not going to let you adopt this dog. She can only go to a home with other dogs. And by the way, she can’t live in the city, either.” Had any of that that been in her bio? No. Had they told me that before I started to get excited and bond with her? No. Would I have even chosen her had I known this was the case? Of course not. So I left, feeling sad that I was not getting the new best friend I wanted, and deceived that something so important (a deal breaker, if you will) had not been stated upfront.

As I walked away, I thought to myself that the situation sounded oddly related to online dating. I’m sure we’ve all been in a situation where a profile says exactly what we want it to. We meet our date and everything seems to be going fine until…

BAM! – Your date tells you he doesn’t want children.
BAM! – She’s really just separated and not divorced.
BAM! – She has four kids but she only listed one.
BAM! – He said he’s Jewish but he’s not practicing and doesn’t care about his partner’s religious affiliation, yet when I ordered pork lo mein, it looked like he was going to have a heart attack.

In online dating, it’s so important that your deal breakers are out there front and center. If you don’t want children, that’s fine! Just make sure you check that box off in your profile. If you’re extremely religious, that’s fine, too! Don’t underplay that simply to get more dates. The last thing you want is for someone to go out with you only to be disappointed because you didn’t disclose something really important in your profile. So don’t be bashful. Be true to yourself. You may go on fewer dates, but your dates will want you for you rather than for the person who is trying to appeal to everyone simply by not sharing the truth.

And this goes for searching, too. As hard as it may be, try not to fall in love with someone’s pictures and profile (just words on a page) before meeting in person. I kept that in mind as I continued to search for a pet. I wanted a dog who loved me for me – living in an apartment in downtown DC, having no other pets (besides Sir Quackers, my childhood stuffed duck), and just wanting to show him/her love and affection. With that in mind, I have since rescued a different dog, Scruffy, from the same agency, and I could not be happier with him! 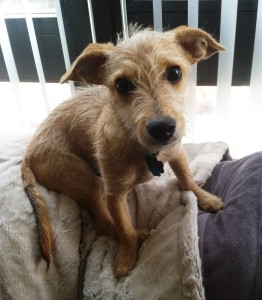 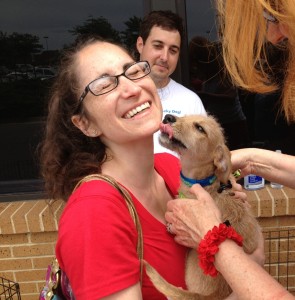 2 thoughts on ““Paws” Before Posting: Curb Your Desire to Hide Deal Breakers”