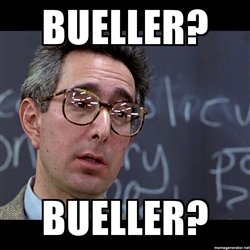 This one is mainly for the ladies…

You’re swiping through Bumble. You see a really cute guy (or gal). You swipe right.  You match!! You message him (on Bumble, the woman has to write first)… only to get no response. The 24-hour period where responses are allowed is up, and—poof—your match goes away just as quickly as he got there.

The question is this: If someone looked at your picture, presumably liked what he saw, and then swiped right, isn’t he interested enough to write something back? Let’s look at six reasons why he may not reply to you:

Keep your first message short, sweet, and end it with a question. Just remember that anything is better than “Hey,” or “What’s up?” because the only response to these is “Hey” and “nothing”/“not much,” respectively. Boringville!

The best way to write a message is to reference something in his profile. So, if he says, “I’m an avid ping pong player,” you can say, “Ping pong, huh? I can’t say I’m avid like you are, but I bet I could give you a run for your money in tennis. Do you play?”

Sometimes, though, the other person doesn’t write a profile that provides any “message bait” (something interesting and unique for you to use in your message), so here are a few examples for when no “message bait” is provided:

It’s true—some men, knowing how discerning most women are, simply swipe right on everyone to see every single person who likes them in return. They leave no stone unturned this way. So, they may not be interested in 1) dating at all, 2) everyone they swiped on, or 3) even looking at the matches once they come through. This could just be a game to them.

That TPS report was due today!  He has to call his mom for her birthday! He went to the dentist to have a root canal (ouch). Sometimes people are just busy.

Along the lines of being busy, sometimes people look at their matches, say they’re going to write later, and then simply forget. If someone likes you enough, though, he’ll remember to write back.

I don’t know about you, but I have different notification settings for different apps. (I have no interest in my weather app telling me every time there’s a little drizzle outside! That’s what windows are for.) Some people don’t have their notifications set for the dating apps, meaning they have to actively open the app to check messages. Not everyone does.

Sadly, this is probably the most likely scenario. He saw your first picture. You’re really attractive!  You match—yay! You write to him, assuming he liked what he saw. Then, when he gets your message, he reads your profile and/or looks at the other pictures and decides, for one reason or another, that he’s just not that into you. Women often use all of the information they’re given (profile, pictures, etc.) up front and only swipe right on those they want to talk to. Men, not so much.

The moral of all of this?  Don’t take someone’s lack of response personally. We never know why he replies or doesn’t, even if he has seemingly expressed interest. Just take it all with a grain of salt, keep swiping, and know that the right person for you will reply… and want to meet.

35 thoughts on “6 Reasons Why They Don’t Reply”