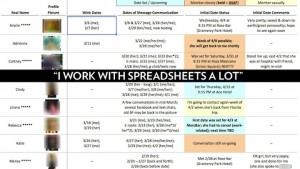 The internet moves fast, doesn’t it? In the course of several days, a guy goes on a date from Match.com, thinks there’s potential for a second date, and then gets publicly humiliated, hereby being named “Creepy Spreadsheet Guy.” What to know the whole story? Click here.

Honestly, I feel badly for him. Before I started A Little Nudge, most of you know that I did online dating myself for many years and kept a… wait for it… spreadsheet. Granted, it was not as detailed as his, but there is certainly merit to staying organized. (And, like him, my background is in finance/econ, so when you have a tool like Excel, why not use it?) His only mistake (and, granted, he used extremely poor judgment!) was sending it out. But sometimes when guys like girls (and when girls like guys, for that matter), they do dumb things. Perhaps in his mind he thought the girl would be flattered since he only had positive things to say about her, and after one date, he trusted her – a huge mistake. It was the girl, in my opinion, who is in the wrong for sending it to her friends. Ok, she didn’t like him, but did she have to humiliate him? When you put something in writing, there’s no telling how far it can go.

To this day, I still have my JDate spreadsheet from when I was dating. And I gave italics to anyone I’d like to see again, Jeremy getting the coveted last set of italics. And now I keep spreadsheets for all my clients. Would I want them to be embarrassed by e-mailing the same person twice? Nope. There’s merit in the spreadsheet, and I’ll go on record saying that. But to this day, I have never shown anyone that spreadsheet… and I think I’ll keep it that way.