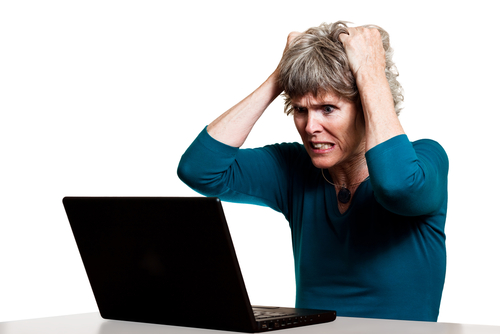 I am frustrated.  It seems like no one is even reading the online dating profile I put out there.  Men are emailing me from all over the country even though I explicitly stated only looking within 50 miles, and they are just not of the caliber I want.  I’m thinking about adding a list of things in my profile that I don’t want, like someone who makes less than I do, someone who’s not Christian, someone shorter than I am, someone missing his teeth.  (I wish I didn’t have to say that one, but sadly, I do.)  Do you think that’s a good idea?  Please help.  I want to just quit.

The problem you state—men not reading your profile—is a problem that, unfortunately, many women (and men, for that matter) have, regardless of religion or anything else that may be a deal-breaker for you.  There is really no way to avoid this.

To answer your question, though, I never recommend putting things you do not want in your profile because it sounds very negative and bitter.  For example, saying something like, “I want someone who doesn’t make less than I do” reads to people, “She’s a gold-digger… or she had a bad experience with men mooching off of her in the past.”  Most people will pass you by because of the negativity.  I do, however, recommend putting what you do want in your profile, such as someone intelligent and driven.

I can’t deny that many men are more focused on the photos than the profile.  In fact, Tobii Technology, an eye-tracking and interactive gaze technology, in partnership with AnswerLab, a user experience research firm, conducted a study in 2012 tracking the eye movements of men versus women when looking at online dating profiles.  There were only 39 participants, not nearly enough to be statistically significant, but the results showed that women spent an average of 84 seconds evaluating a profile, while men spent an average of 58 seconds overall.  Men tend to focus on the profile photo, and in some instances, men spent as much as 65 percent more of their time than women looking at the profile photos.  So, you’re not imagining that your profile is sometimes getting overlooked.

That said, to ensure that men who fit your criteria are noticing you, you’ll have to do your own search and reach out to them.  I encourage both men and women to both search and message people of interest.  I know some women question this, thinking that it makes them appear desperate or aggressive.  It makes you appear neither of those things, but rather proactive and confident.  What we cannot control is who emails you.  There is no barrier to emailing you, so why wouldn’t someone?  Just considering it flattering—even if he has no teeth—and then you can delete the emails from those who are clearly not the right fit and focus on those who are.

It’s still online dating, so it’ll have its fair share of awkwardness, frustration, and fatigue (whether online or not, dating can get tiring), but it also has those moments of excitement, nervousness, and anticipation.  As hard as it may be, try not to let the less-than-stellar men who email you guide your whole opinion of online dating.  You can’t blame them for emailing an attractive woman like yourself!  It’s only when you put forth the effort to use online dating to its full advantage—reaching out to people of interest and starting conversations—that you can fully reap the benefits.  Just as I tell people not to let one bad date cloud their whole opinion of a dating site, I’ll say the same for a few creepy emails.  Let it roll off, and then try again.  In other words, don’t quit!  You’ll be on some great dates in no time.

One thought on “Is anyone out there reading my profile?”