How many deal breakers is it appropriate to have when searching online for a partner?  One, five, fifteen?  There is no magic number, of course, and Patti Stanger of The Millionaire Matchmaker says that five is a good choice… and I agree.  If there’s one thing I know from both my own dating experience and from being a dating coach, though, it’s that 125 is too many!  Where did I get this crazy number, you ask?

A woman recently posted on Tumblr a section of a guy’s profile on OkCupid that I’ll just say was pretty limiting.  And when I say “pretty limiting,” I actually mean ridiculously and obsessively rude and off-putting.  Below is just a small sample of his “do not message me if…” section.  (For the record, OkCupid actually has a section called “You should message me if…”  This means that he actually added this new section to his profile.  Classy.) 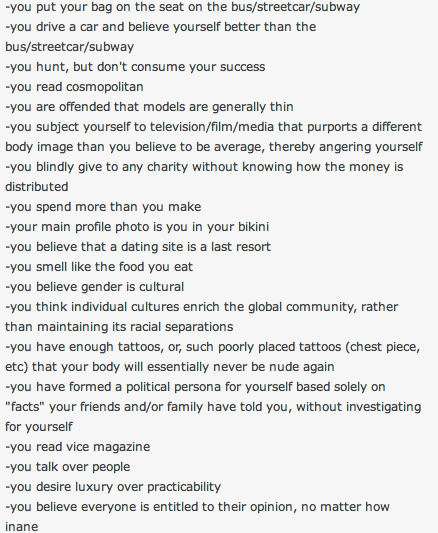 After reading the entire list, I counted, and I have 20 of his 125 “don’t message me if” qualities.  Most notable were:

Even if I did fit everything (which I’m pretty sure no one possibly could), I would be so turned off by the negativity that I wouldn’t want to date him anyway.  A question I would pose to him is this: Why do most of these things matter to you?

In talking with Sarah Gooding, the resident Dating Coach at PlentyOfFish, she and I agreed that one should create and live by a few key dating deal breakers.  Most singles have established certain rules when it comes to dating, but they don’t know that they may have too many unnecessary deal breakers that are preventing them from finding a great relationship.  To ensure the right person isn’t being overlooked, let’s look at these five dating deal breaker rules, courtesy of Sarah and elaborated on by yours truly:

A lot of clients have said things to me like, “I can’t date him.  He’s between jobs.”  Does this mean he can’t get a job in the future?  Of course not!  Income can change; employment status can change; ambition probably can’t.

Sit down and really think about what’s important to you.  Maybe it’s religious beliefs or level of education.  Stick to your guns on those things, but beyond that, explore.  As an exercise, picture that perfect person with or without each “deal breaker” and see if it matters.  If not, then it’s time to reevaluate your list.

Most online dating sites have many check-box questions, such as age, religion, children, etc.  This is where the deal breakers will come out.  If you want kids, then check that box accurately.  No need to then state, “Don’t write to me if you don’t want to have children.”

It’s easy after a relationship ends to want to find the exact opposite type of person, isn’t it?  We go through all of the things we loathed about our ex and list those as our new deal breakers.  I encourage everyone not to do this because 1) it comes off as fairly bitter and 2) there must have been some good quality in that person if you dated in the first place.  Using what you learned from your last relationship, make your list, but don’t make it solely based on what didn’t work the last time.

Negative: I’m not looking for players or serial daters.

Positive: I’m looking for someone who is ready for a committed relationship.

If someone meets all of the criteria you’ve set for yourself, then it can’t hurt to give it a try.  On the one hand, perfect on paper doesn’t equal perfect in real life, so you’ll still have to assess chemistry, but at least you’ll know that you’re off to a good start.  On the other hand, if you know that someone has one of your deal breakers (let’s say religion), then perhaps it’s best not to “try that person on” if you know in the long run it’s not something you can live with.

Remember that in the end, what’s often the most important is how someone treats you.  Is he or she kind, generous, and giving?  How about trustworthy and honest?  That’s what matters in life.

A final note to the guy on OkCupid:

I wear yoga pants when I’m not engaging in yoga (I may or may not be wearing them right now), and I have participated in a flash mob.  We are obviously not meant to be.

2 thoughts on “How Dating Deal Breakers Can Hinder Success”