It was 11 AM on a recent Sunday. My friend Stephanie was looking forward to meeting her date for brunch that they had scheduled over the dating app Bumble. She arrived on time, sat down at a table and waited, assuming she had beaten him there. When she finally texted him to ask where he was, she saw that he had written, “I’m here.” She looked around… no sign of her date. She asked, “You’re at Busboys and Poets?” which was the place they had agreed on in advance. He was not. He was in a completely different part of town. (I have a feeling he got his dates confused and was meeting another woman where he showed up, but that’s just conjecture!) At this point, it should have been a no-brainer… her date should have apologized, gotten in an Uber, and raced to where Stephanie was sitting and waiting. Is that what he did? Nope. He asked her to come meet him, which wasn’t feasible for her because she had an appointment after the date that she had planned conveniently located to the date. Rather than doing the kind thing (he apparently never even offered to come to her!), he wrote back to her, “This won’t work. Have a good day.” Appalling. 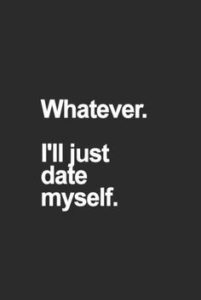 I received a text from a client yesterday saying that she got stood up. Apparently, her coffee date texted her while she was on her way to the date itself. When did she see the text? After she arrived.

Then there’s me. I had once scheduled a date with someone from one of the dating apps. (Coincidently, all of these stories come from Bumble, but don’t overanalyze what that means… it’s just a very popular app.) We had discussed meeting for a bagel at 10 AM on a weekday, since both of us had flexible work schedules. He even joked that he had never been on a “bagel date” before. (That’s what you get when you’re meeting a Jewish woman from New Jersey!) We worked out the place and time, so everything was set. The evening before the date, I logged into Bumble to both review his profile (gotta be prepared!) and give him my number in case he needed to be in touch the next day for any reason. His profile? Gone! Did he unmatch me?? (For those who don’t use the dating apps, “unmatching” is the equivalent of permanently deleting an email, but this time removing the whole conversation and profile, without leaving a trace.) But we have a date! Do I still go? I mean, we did make the plans. Would he be so rude as to not tell me he was canceling on me and just—poof—disappear? After some internal debate about what to do (and an Instagram poll where, interestingly, most of the women told me to go and the men said not to), I went to the planned location at 10 AM. I waited… and waited… and waited. My date did not arrive. And, much to my dismay, the bagel I ordered anyway was mediocre at best.

These stories happen to all be about men disrespecting women’s time, but it most certainly goes both ways. (In fact, my podcast co-host, Chris, called me with a similar story last week.) The important lesson here is that no one’s time is any more valuable than anyone else’s. It doesn’t matter whether it’s someone you’ve never met before or a friend or significant other. Canceling at the last minute or, worse, standing someone up is the lowest of the low. You are essentially telling this person, “I am more important than you are, so I can waste your time.” IT IS NOT OKAY.

As I’ve written in a previous article, I mused as to why people seem so much flakier today than years ago. Smartphones have a lot, if not everything, to do with it. You can cancel on someone without seeing his or her reaction. You don’t have to incur the ire of someone if you don’t show up… you can just turn off your phone. But, remember that there is an actual person at the end of that phone. A person who has set aside time in his or her life to meet you. A person who now has to find other plans or not have any plans. Sure, there are valid reasons to cancel—your child/parent is sick, work put an unexpected deadline on you, your dog ate a rogue piece of chocolate on the floor—but even if you have one of these reasons, remember that your time is no more valuable than someone else’s. So show up or show yourself out.

Show Up or Show Yourself Out
Tagged on: Bumble date    i got stood up    online date cancelled    stood up for date    texting    texting and dating

8 thoughts on “Show Up or Show Yourself Out”